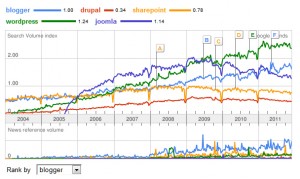 According to Google Trends, WordPress is the fastest growing web publishing platform worldwide. While English speaking countries may appear to dominate, WordPress is being used extensively in Indonesia, Malaysia, Singapore, Colombia, Spain, India, Romania, South Africa, Netherlands, Peru, Brazil, Philippines, Mexico, and Portugal. According to Google Trends, WordPress is being used in Indonesian at almost triple the rate of English, and nearly the sum total of English, Swedish, Dutch, and Romanian.

The Prescott Area Art Trust is responsible for all the bronze statues you see at the courthouse square in downtown Prescott. They needed a website to get the word out about what they do and raise ...

M Line Holdings is a publically traded holding company for services and products that are primarily marketed and sold to the commercial aviation, medical, oil and gas and defense industries. Th...

RVThereYet was designed from scratch to fill a need in the RVing community. There are over 16,000 RV parks in the US and while they are adequately represented in big phone book size directories the...