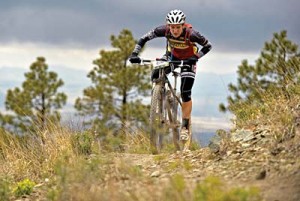 Though the bike racing was the main attraction of the 2015 Whiskey Off-Road on Saturday, April 25, there were quite a few other entertaining attractions to be had, with music by performers like Kenny James, Road One South Blues Band and Roger Clyne and the Peacemakers. And while Endura had to cancel its bagpipe endurance contest, it still planned to have a special “Whisky” tasting at the Sierra Nevada Brewing Company beer garden.

Nadine McCrindle, marketing manager at Endura, said that the company is a Scottish brand and there was supposed to be a bagpipe endurance contest to bring some Scottish flair to the off-road. However, she said a professional player found the instrument to be broken before the event. McCrindle said there were still Whiskey Jerseys, though.

“What we do is we work with a few of the local distilleries in Scotland… to put together jersey collections,” McCrindle said, stating that all the jerseys are commemorative. “They’re made in Scotland which is a very hard thing to do when you want to produce as many as we can sell. And something that we’re very proud of.”

Endura also had a “Whisky” tasting in the evening at the Sierra Nevada Brewing Company beer garden, as McCrindle said it is the drink of Scotland. She noted her expectations for a lot of people to attend as the announcers had been promoting it Friday and Saturday.

Lindquist Realtors have been selling property in Prescott, Arizona since 1981. They already had a website, but they needed a new design to represent the top notch realtors they are and the propert...

The Calvary Chapel in Dunfermline requested a redesign for their church website. They wanted to give it a more mordern look and add some functionality. Rotating images of the local area were add...

M Line Holdings is a publically traded holding company for services and products that are primarily marketed and sold to the commercial aviation, medical, oil and gas and defense industries. Th...