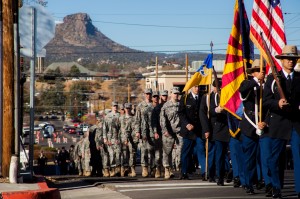 A parade complete with more than 60 entries and hundreds of military-themed T-shirts will honor veterans next week.The City of Prescott and the VA Medical Center have been at work on plans for the Prescott Veterans Day Parade – the second one to take place in downtown Prescott.The parade, set for 11 a.m. Tuesday, Nov. 11, will circle the downtown plaza, and Prescott Special Events Manager Becky Karcie says the route will be lined with special T-shirts.“Tim’s Auto Group will be handing out free ‘veterans’ T-shirts,” Karcie said. “We’re asking people to put them on over whatever they’re wearing.”The goal, she said, is “a sea of shirts lining the route.” Tim’s will be handing out T-shirts to the first 500 parade-goers, Karcie said.The shirts will tie in with the theme, “Remembering – the sacrifices, the Super Service, the ones still serving.”“They’re going to be a huge part of the parade,” Karcie said of the T-shirts. “We would really like to show that Prescott knows how to come out and support our veterans.”With about a week to go, Karcie said the parade has about 60 entries, and is still accepting entries through today (Monday). Anyone interested in having an entry in the parade should call Karcie at 928-777-1349.Application to be in the parade is free, and winners will receive awards in several categories, including: non-profit, fraternal organizations, motorized groups, music, marching units, hospital entries by veterans, and best overall, the “super hero award.”The parade will commemorate the armistice between Germany and the Allied forces at 11 a.m., Nov. 11, 1918, which ended World War I.Opening ceremonies will begin at 10:30 a.m. Nov. 11, and will feature speakers Frank Ayres, chancellor of Embry-Riddle Aeronautical University, and VA Director Donna Jacobs. Prescott Mayor Marlin Kuykendall also will be on hand to introduce the parade’s grand marshals.On Friday, Karcie said the grand marshals were still being confirmed. The parade will highlight Vietnam War veterans, as well as all veterans, she said.The opening ceremony also will include the National Anthem by Mike Nache, and the presentation of the colors by the Prescott Regulators.New this year will be the Team RWB Prescott Chapter inviting all veterans and civilians to participate at the end of the parade in a 20-minute wellness program.Prior to 2013, the annual parade had taken place at the VA Medical Center. Last year, the VA and city collaborated to move the parade to downtown Prescott to make it more accessible for more people.Special accommodations will be provided by the VA Medical Center for transportation and seating for veterans to and from the parade. Veterans can contact Voluntary Service at 928-445-4860, extension 6013. The shuttle will pick up veterans at building 151 (the Domiciliary).In addition, the city is working to arrange a live broadcast of the parade through Access 13, so anyone who cannot attend will be able to see it on Veterans Day.

The Yavapai County Republican Committee needed a new look and that was provided by local Prescott ad agency, Helken and Horn. I took their excellent design and coded it into reality. The old site, ...

Lindquist Realtors have been selling property in Prescott, Arizona since 1981. They already had a website, but they needed a new design to represent the top notch realtors they are and the propert...